If you have a HARD Moon Pluto aspect in your chart, then your mother had a problem. 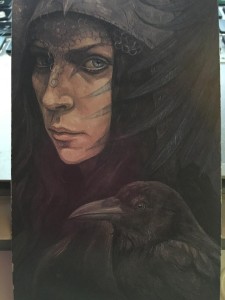 Or it may have been more passive — them wishing we’d never been born or wishing we would “just disappear” (and then feeling guilty, and guilt that remains in the shadow and does not become surface consciousness can breed some ugly monsters, like projection, projection onto the child).

When a person doesn’t admit the full range of human emotion, that’s when the problems start. The problem isn’t the FEELING as much as denying the feeling.

So it’s likely subconscious on their part. But WE feel. We see it. We feel it. It’s too taboo for her to feel. And add this on to whatever other problems there were, her childhood, her marriage, her life situation, the stresses of motherhood, etc. Not that I’m making excuses for the evils that *some* parents do. Because I don’t make excuses.

If a mother doesn’t want her child, if a mother abandons or neglects or abuses her child (emotionally physically sexually), has bad boundaries with her child, all of this of course goes against the Ideal Mother idea, which she also has in her head. We all do. So it stays in the shadow space and gets projected onto the poor kid who was born into it. Innocent.

And this is one reason why I love astrology. Because we have the star language to discuss it. 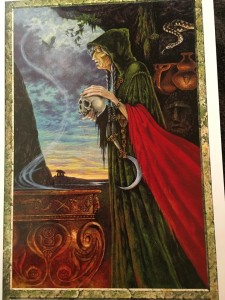 If you have a Moon Pluto hard aspect, there were times when your mother wished that you were never born or she treated you that way, with such discard. Maybe she wanted an abortion or a miscarriage and didn’t have one, wasn’t able.

She projected her violent self loathing onto you and you as a child absorbed this. You had no choice. It was your womb. And you either turn it against yourself or others, in some way, somehow.

as a grown-up you can be free of her projected violent self-loathing. It fact, you have to become a PERSON not a projection. To be happy. Become a SELF. This is what healing is.

This may be hard for you to imagine if you had a healthy mother most of the time. You can’t imagine what it is for the caregiver to abandon or neglect or abuse. You haven’t known it.

You may also have  a Moon Pluto hard aspect and not see yourself in this but you likely will, eventually. Some part of this blog post description will ring in your ears if you remember it.

So how does one heal? This is the most important question of all and I drew the Hanged Man for us.

As Marsha Linehan wrote: acceptance of reality is not the same as judging it good.

I believe that if you don’t see things for how they were or are, to the best of your ability, you cannot truly heal or be healthy. For example, if your mother was psychotic, you can’t pretend she wasn’t. Labels can be helpful in this way. Name the behaviors. Behaviors are not that hard to identity and name. Does it take courage? Yeah, it does.

Because also if you try to discuss such things with “friends” or family members, they probably don’t want to go there unless they too are a Moon Pluto person who has come to consciousness.

Reality is the only way out of hell and Moon Pluto children were born into the mother’s hell. 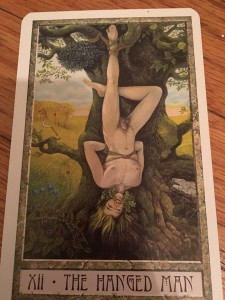 Most important: it’s not your fault. It wasn’t your fault. But you do not have to continue living as a projection of your mother’s violent self-loathing.

You can find YOU.

This happens all the time — there are people who live their lives and we interact with them, but they are projections not actual “people.” Know what I mean?

There is hope but hope comes with the price. If you start on this process, you will feel heartbroken for a good long while. I can promise you that. But eventually you will learn to  live side by side with this heartbreak. Not that it makes the past okay but that you co-exist and THEN you can love and be happy and healthy in all the ways you dream of.

Much love my dears
xoxo

-+*Tonight my boyfriend asked me what would make me happy and I always have trouble with this question. Let him be the […]

-+*Another humid day in the Big City. Mercury is retrograde and I still don’t feel like blogging which is rare for me, to […]