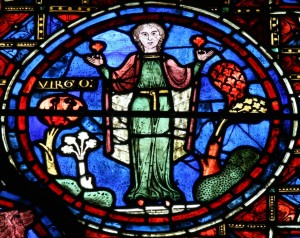 The Moon is in Virgo tonight and Virgo is on my mind because I have toomuchVirgo in my chart (including Moon and Pluto in Virgo in my 1st House) and I tend to want to fix first and listen later… (Do I? Or is that just the usual Virgo self-criticism?)

A story: the other night my Scorpio buddy texts me with some important news and before I can say “I will save you!” I’m right there with my cape and my super powers, not really supporting but… *trying* to support. There is a difference.

Did I mean well? I did. (Did I? Virgo South Node = self doubt). But I had an agenda. I wanted to say THAT ONE THING that would bind him to me.

And then he stung me with his Mercury in Scorpio stinger: “You’re not helping.” (Although you usually do, he added.)

And I knew. I knew he was right. And then I got all Cancerian wounded and said OKAY BYE (a trick I learned from a Cancer Moon!) because in that moment I could not yet face that I was being inauthentic. I wasn’t coming from the high side of Cancer. I was coming from the “how can I make myself indispensable to you” side of Cancer i.e. crabshit.

Later on the phone, he gently chastises me, as only a Scorpio can, for pretending to run off. We’re friends he says. Don’t do that. And later, after I’ve figured this all out, processed it through my Virgo Moon mood/mind processor, I realize it fully, my aha moment, and I message him, telling him. You know what? I just didn’t know what to say.

And that’s fine, he says. You’re right, I said.

Here’s a link to my Astrology and Tarot Readings page and yes I am doing Mini-Moon Readings for the New Moon in Sagittarius!

-+*I listen to certain songs to get me going, to inspire me, to make me feel that… Moon Pluto thing. Emotional intensity. […]

-+*Pluto in the 8th House is an infamous placement. I admit I get a feeling when I see it in someone’s natal […]

-+*Hey. Hey you! I LIKE this upcoming Full Moon in Aquarius. Check it out: Moon opposes Sun of course and an opposition […]

-+*Readers want to be accurate. Doesn’t matter what kind you do, what your tools are. You can’t know it all. Still, you want […]