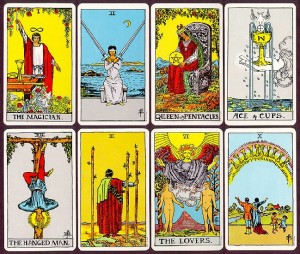 Synchronicity. The word is from Jung, right? I’m no expert. That’s why I’m asking you 🙂 and I have merely a layman’s understanding of the term and maybe what I’m about to describe is NOT synchronicity at all. Yet the word came to mind.

So this morning I posted about the 8 of Swords. And it was an insight that I got out of bed to write down. Hours later, I was on the train. And I realized that what I thought the 8 of Swords post was about for me… well… I was wrong. I was looking in the wrong direction.

You know what? A person can spend years building building building building something that they do indeed need to build and yet completely ignore the other thing. Over there. That thing. Which is also. Broken. And you try band-aids. And Burts Bees. And prayer. And hiding. And Tarot readings. And then one day… BOOM. 8 of Swords moment. The burden on your back is not what, who, you thought it was at all. The revelation is cutting and clear.

And the pain is suddenly gone. Your back is no longer under attack and yet… there is still work to do. You’re still in the same place but NOW YOU KNOW and can take action.

Maybe you can think of the 8, 9, and 10 of Swords not just as a progression but as ONE MOMENT. And you are going to get free. The ropes, the blindfold, the Swords… it’s MENTAL. I don’t mean you’re crazy. I mean crazy-making. And that you aren’t as trapped as you think you are.

Can what? Can live where you want. With who you want. Love who you want. Can be SAFE. Can be happy. Can seek meaning. Can dislike, can have preferences, can HATE. Maybe you hate green beans. Well, don’t eat them. Can make choices that are about YOUR NEEDS and your life, more than sacrificing for… who?  Who have you placed above you?

And when others come to tell you that you’ve got it wrong, that you aren’t serving them? That you aren’t being good enough, hiding your light enough, contracting enough, sweet as pie enough… Well, that’s their Sword. Not yours. And the more light you stockpile, the more you may have this problem UNTIL you stop… being afraid to live your life. That’s the sweet spot of the Swords for me.

Uranus square Pluto (by transit, in your chart) can feel like you’re being crushed, and it alternates, Uranus-fast with Pluto ungodly slow.

Pluto goes direct next week. Get ready to move.

-+*So I was asking on my Facebook which is worse for you? to feel hate or to feel sadness. I think for […]

-+*I was working with people by email today: new readings and readings in progress and it felt good. So gratifying to work […]

-+*I was on the train thinking about love and death. That the fear of commitment is actually the fear of intimacy that […]

7 thoughts on “Uranus Square Pluto: Liberation, Synchronicity, And You”