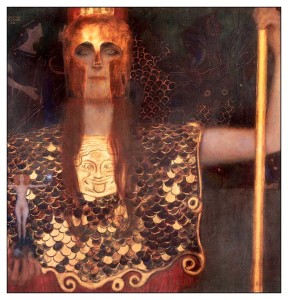 We’ve just started talking about the Goddess Asteroids in my virtual classroom, MoonPluto Land 🙂 with Pallas Athena as our first, and I was on the subway, heading to run an errand when suddenly I got an axe-splitting headache.

And I was just getting to the part in Demetra George’s awesome Asteroid Goddesses book when she describes Pallas’ birth.

“…Pallas sprung from Zeus’ forehead as a full-grown warrior queen, clad in a suit of armor…”

Think about that for a moment. Not just the “parthenogenetic” birth or being born from a HEAD (an idea, a thought, a brain, the opposite end of the body from the usual birth place) but the idea of no childhood. To be born not just ready to fight and win, but born… whole. A whole woman.

There are many fascinating myths and legends surrounding the Warrior Queen and one of my favorites is how she helped Perseus defeat Medusa and then used a vial of Medusa’s blood for healing others. Cool, huh?

If you do a quick Google search you will right away see “patterns.” That Pallas was not just Goddess of War and Victory and Arts and Crafts (like pottery), and Health and Healing (especially self-healing techniques like visualization says Ms. George), but that Pallas excelled at what sounds to me like big picture thinking that comes from intuitively absorbing the details. The pattern emerges just as Pallas emerged from Zeus (Jupiter’s) head.

That in one small moment she could see and interpret the whole and it was a Uranian-type “flash of insight,” or “creative intelligence” which then blossomed into strategy and thus manifestation. (Damn, I like explaining stuff!)

With Libran tact, it appears that Pallas was a “tamer” (and that’s my word for it;)). She brought culture to the people. And apparently she preferred brains and pacifism over brawn, but could fight and would fight and win.

In some ways she’s very Uranian (and she is associated with Aquarius, among other signs) in terms of the brilliance but without the frenetic or wild quality. She’s associated with Libra too.

And this notion of patterns, seeing patterns, I know will keep my brain working overtime tonight 🙂 because it reminds me of chart-reading. You can look at just a piece and then start to perceive the whole.

My Pallas is in my otherwise empty 7th House. She trines my stellium in Cancer although the orb to my Sun is the tightest.

Find Pallas in your chart! See where you are wise and strategic!

PS Correct me if I’m wrong but it looks to me like transiting Pallas is at 7 Aries, retrograde. Whoa. She is the PROTECTOR of the Uranus Pluto square. She is the protector, the FIERCE DEFENDER of whatever is happening in early-ish Aries for you. You may be a tad defensive there, in that area of your life these days. And our next Full Moon, in Aries, will be conjunct Uranus. And Pallas.

-+*I don’t know what to do now about love. It feels like one big thing. That I went from the previous one […]

7 thoughts on “In Praise of Pallas (Part One)”