I just drew a few cards for someone. It’s a regular weekend thing I do, the Weekly Tarot (click here for info and scroll down) and one of her cards was the Eight of Cups so I suggested a Tashlich type ritual for her because the Eight of Cups woman is walking away.

The Zohar, the most important book of Jewish mysticism, states that “whatever falls into the deep is lost forever.”

I suggested water, a water ritual, casting into the sea.

You can Google Tashlich on your own, but know this:

the prison in which you find yourself, of your own making, of their making, it is not the place for you, not now, not anymore. 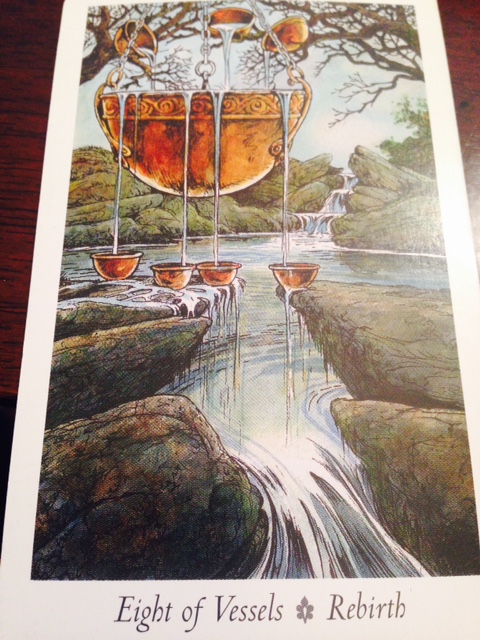 Full Moon Eclipse in Libra allows us to leave “partnerships” that are confining. Partnerships that are WRONG. This word “partnership,” long associated with Libra and 7th House can refer to ANY person place or thing or habit of mind you find yourself mixed up in that no longer fits you.

With every ending comes a beginning because space is created, a lack, an opening to be filled. Or can we just, temporarily, or as long as we choose, leave the space unfilled because that also is okay. Not rush to stuff it with junk food for the soul. Why do we rush? We rush to fill the lack because the hole, the space, contains a scream, terror, that we feel we are not permitted to voice or hear.

For the moment this scream is the Uranus Pluto square aspecting the Full Moon in Libra. The dastardly bastardly dynamic duo are separating yes, the last square is complete yes but they are tightly wound together still and making a mockery of Libra’s peace equanimity.

Be kind to yourself. The world out there is hard enough. Be kind.

*
NEW POST from Belief Net: Page of Swords
NEW INFORMATION about working with me
DETAILS about April’s Poetry Workshop! Yes!

-+*So, like, you have to leave your brain behind. Turn it off. I look at charts but I’m also doing more Tarot […]

-+*I went outside to smoke a cigarette. And it was dark, is dark, despite the little light by the side door and […]

(Angelina Jolie has her Sun in Gemini) *** First, the nuts and bolts! Venus entered Gemini with three cell phones in one […]