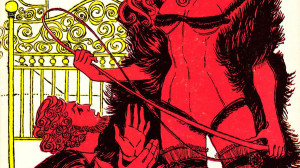 My 50 Shades of Grey posts, as well as my wanting to advertise myself as a kink-friendly Astrologer (i.e. non judgmental) created a small energy flurry in my life the other day. A client wrote to me with an interesting “problem.”

Man with submissive orientation desiring a Mistress/Goddess and his steady girlfriend of a few years appeared to sometimes “not mind” playing the role and then sometimes wanting him to take a more Dominant role, and then sometimes just confusing him 😉

He couldn’t make sense of her. No consistency, he said. (Oh you men! Always searching for consistency ;))

The question then became what was her true nature. What did she want? Did she even know? Did she know and was hesitant to discuss? (I found out later she has Mercury in Cancer = indirect!)

The gentleman is also a mutable Sun sign, a stellium in the sign, including personal planets, which showed me his innate desire to serve AND YET his foxy Mars in Scorpio kept steering her towards a Domme role which she may not have been entirely comfortable with and didn’t know how to express. That was my 1st conclusion.

And when I saw her chart, I saw intense attraction between them, her Mars conjunct his Venus, as well as some electric Venus-Uranus contacts but I also saw what I had suspected and my suspicions correlated with what he was telling me.

She, my friends, was also submissive. Could two subs find happiness together?

Ultimately I think the answer depends on the couple! How important is the psycho-sexual dynamic to each of  them and can they be satisfied in other ways. Are they willing to switch. Will Mutable Man’s tactics continue to annoy Ms. Gemini. And considering that Mutable Man is actually topping from the bottom, is he not already IN CONTROL? He is.

It just doesn’t feel like it to HER. What she desires is not someone domming her to become more domme but to actually tell her what to do, to relieve some of her earthly burden of decision making and being in control, even if only in the bedroom.

It’s complicated but not really.

Are they willing to sort this through? If they are, then their potential is multiplied. If either one of them is too fixed (stubborn) they will run into trouble.

Has your relationship flowered against such odds?

-+*Scorpio (Pluto) is the taboo, the forbidden, what you don’t want to acknowledge, your “dark” side, your desires, what happened to you, […]

-+*I don’t know what to do now about love. It feels like one big thing. That I went from the previous one […]