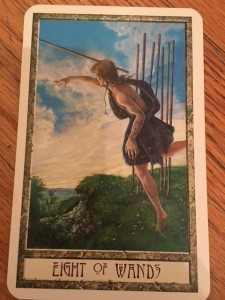 This whole Saturn retrograde thing may have you feeling like you’ve gone back in time. Something you thought was settled is not settled at all. But if you were (are) watching the stars, then you knew it was coming.

April is a funny month. Mercury goes retrograde at the end of the month (in Taurus). Mars goes retrograde mid-month in Sagittarius. Jupiter and Saturn: both retrograde now. Pluto goes retrograde the day after Mars does. Juno has been retrograde since early March in Scorpio (ah the faithful wife Juno what’s she up to now in your chart?).

Where are we clear? Which way do we go?

Sun in Aries, Sun in Taurus. Venus in Pisces, Venus in Aries. Uranus, Neptune, and Chiron.

THOSE houses, those signs, those energies. That’s where. And if you want to include the Goddess Asteroids, Ceres, Pallas, and Vesta are all direct as well.

It’s not a total standstill but it may feel like one at times. I drew a card for advice and I got the Eight of Wands. The other day I was talking to a lady who said she translates this card as “up in the air.”

It was an unfamiliar meaning to me. Usually I read this one as generally positive, busy, fast, forward, communication, but here that up in the air really fits.

And then, ha, I drew the Eight of Swords as though to convince me.

In April we have to coast. We can be Sun, we can be Venus, we can outer planet it up with Uranus and Neptune (interesting don’t you think? to isolate what’s not retro? And focus THERE?).

Our true work (Saturn) and our motivation (Mars) go into hiding. Could be frustrating, especially for those of you with research papers to complete (like the college student I did an impromptu mini reading for today who had three papers to finish and she got the Wheel and the Knight of Wands and I reassured her it would be fine but that she better stop procrastinating and get on with it. Taurus Sun, she).

*
Reading Special this weekend! It’s a double. Purchase one hour long reading ($115) and get two hours. One per person.

-+*When the astrological seasons change, it’s our job to do our homework 🙂 We have begun the shift from Pisces to Aries, […]

-+*What to do when you’ve lost so much and you want to die. Good question, eh? This came up in consult today… […]

-+*Match the transit rather than avoid it. In other words, I was writing an email to a friend. He asked me something […]

-+*Do you feel like you have control, power, over your life? I was talking to a client this morning and this topic […]