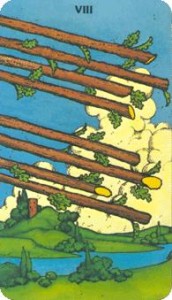 New TAROT post is here, from yours truly on Beliefnet. Please click on the link to read WHEN THE TOWER IS THE ANSWER (to your love problem).

I feel like I’m always hearing stories about amazing therapists but can’t find one myself. Like dating, we just aren’t compatible.

I used to take it as a sign – that I needed to rely on myself. Or at least NOT rely on “conventional’ therapy — but then I’d hear these amazing stories once again, even about therapists who also use astrology or homeopathy or dog training or… whatever 😉

One thing I’m realizing this morning is that I probably need to talk to a WATER SIGN if I ever try a new therapist again.

So with Mercury Mars conjunct I’m forthright but everything is filtered through how it feels. I have my Sun in Cancer too. My first astrologer told me that my feelings WERE logical. And she was right. But we live in an AiR world not a WATER world.
How it FEELS is often MORE important/relevant than the individual words sometimes although you can imagine with my Moon in Virgo in mutual reception with my Mercury in Cancer, my words are pretty damn precise. But once in a while it’s nice to LET THAT GO.

(The following paragraphs may give you a headache. Trigger warning:

For example, me saying that I got thrown out of every apartment I’ve lived in, since I’ve been in NYC and the therapist making a point with me for 10 minutes that one of those situations doesn’t really qualify as “getting thrown out” because of x,y,z  EVEN THOUGH I DID HAVE TO MOVE OUT, was forced due to the situation.

And furthermore (after deciding to borrow his own logic) we could even say, technically that those OTHER situations ALSO didn’t qualify because x,y,z so we can run with this ball, but do you really want to motherfucker? Okay I didn’t say motherfucker. But I felt it 😉 Being intellectually challenged gets on my nerves. I find it to be a waste of time that he felt he had to prove he was right by making these distinctions.  Where I’m coming from: just HEAR what I SAY and TAKE IT at FACE VALUE. And I didn’t say MOTHERFUCKER that time either.)

If a therapist wants to hair split with me over my word-choice and not allow figures of speech in conversation… then we have a communication breakdown. Also, side issue, a therapist can NOTE what the words mean to the client and to himself/herself WITHOUT having to push the point and waste time during the session trying to prove his/her intellectual dick is bigger.

Solution: if you feel your therapist DOES have something to teach you? Then let them “win.” They clearly need to 🙂 YOU are going to have to be the bigger man and just let it go. And often you won’t know until a few sessions if you’ve got a prince among men (or women) or a lemon. NO offense to the lemons reading this 😉

It is a mistake to think therapists are beyond jealousy or fear — they are human too! — but supposed to be professional — although I tend to see underneath the hood, without even wanting or trying to — so when we talk to a new “helper,” unless they are working on their OWN ego and spiritual growth and tendencies to argue rather than listen… we are talking to walls.

(By the way I have always had good luck finding metaphysical help: astrologers, tarot readers, psychics…)

Yesterday in therapy I talked for nearly a full hour and when the therapist piped in, it was with words that I’ve definitely thought and also said (out loud to my partner). This was validating.

And another remarkable thing happened: I went into therapy feeling physically exhausted, weak. By the time I was done verbally unburdening myself? I felt normal again. And there I was, CERTAIN that I was sick. But no — it was the heavy emotional burden that was weighing on me.

Moral of story: writing this blog post has been therapy in and of itself. I’ll let you know what happens next.

Therapy is not a psychic reading. Clients want answers and direction in an hour! In a half hour! In 15 minutes. In five! Candy coated insight that makes it worth their hard earned dollar. Can you imagine? Therapy, however, happens over time. People stay in analysis for decades. Psychic readers, good ones, learn to think fast, to assess in a matter of seconds. I’m just thinking out loud here… how remarkable it is.

Mercury is currently at 14 degrees Libra and will go RETROGRADE at 2 degrees Scorpio on October 4th. It should be no surprise to you that communications, 1:1 communications, are already wonky, as Mercury is in his shadow phase and you know the drill, my friends!! Libra = RELATIONSHIPS. Dealing with other people. Relationships go retrograde 😉 AND THIS MAY NOT BE A BAD THING.

And, yes, I know the retrograde officially begins in the sign of Scorpio but the bulk of it is spent in Libra which of course will remind us of the mega Mars in Libra transit (that we’ve all tried to forget lol!).

You know what? THIS IS A GOOD THING. This retrograde is a good thing. It’s a do-over. All the mistakes, all the missteps, all the RAGE, expressed or unexpressed that we felt last year when Mars was in Libra for so long? Well, now we actually CAN rewrite the past. Do it differently. Mercury = THE WRITER.

For me, that is this Mercury retrograde in Libra transit. Retracing our steps. Doing it better, differently.

Spend time pondering how you really fucked up during Mars in Libra. Take THIS MUCH more responsibility for your actions, even if the other person was mostly in the wrong 😉 Your bullshit still played a part!

*
***YES plans are underway to create a private blog on my site!!
And to still keep one or two blog posts per week PUBLIC but the rest under wraps, by lock and key, which you will be able to purchase access to!
I am still working on the pricing and my tech lady is working behind the scenes with me to figure out the best way to do it. Details to come. It won’t be expensive. If you love my writing it will be worth it. There will also be additional levels of subscription for the Tarot lovers, a card per day or week. But, again, I’m still working out the details***

*
For info about Astrology and Tarot Readings please click on this link!

I am running a SEPTEMBER BACK TO SCHOOL SPECIAL. These are 40 minute readings, by Instant Message or Phone – $50. Email me to schedule moonpluto@gmail

My regular rates have gone up a wee bit! The packages are still available at the old rates! Packages are the best way (cost effective) to work with me.

-+*I started writing plays for Moon Pluto reasons. I wanted people to know, wanted an audience to know how it felt inside […]

-+*I need a lot of extra sleep these days and not because I’m physically tired. I’m preparing for the next part of […]

-+*Not so subtle reminder: ALL THE PLANETS ARE DIRECT, people! Take advantage of this time. LAUNCH! And while I have your attention […]