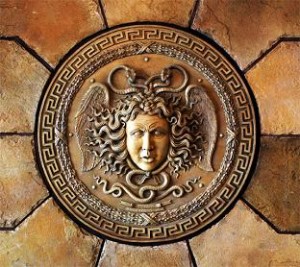 If the world spinning madly on has been a bit too much for you, fear not. Tomorrow morning, the Moon will leave Aries and enter stubborn Taurus so slow down. Everyone else will 😉

In the early afternoon, Mercury (your mind) will trine Pluto (depth). A good day for problem-solving and the solutions may seem richer and more intense than usual but not intense bad. Intense GOOD 🙂

I want to depart from the daily stars though and talk a little about the Full Moon in Aries later this month because we’ve been talking about Pallas Athena, Goddess Asteroid! in my virtual classroom and I realized that transiting Pallas will be conjunct the Full Moon, along with Uranus.

That Pallas is the defender, the protector of your Pluto Uranus square LIFE ISSUES.

That Pallas is probably making you more defensive than you need to be in that area of your life AND YET she’s there for a reason. And that’s how you calm Pallas down: with REASON.

Pallas is associated with air and fire and particularly with Aquarius and Libra. These signs think, these signs strategize and Goddess Pallas was the Master (Mistress?) Strategizer. The pattern see-er and pattern SEER.

All this energy in warrior Aries, squared by Pluto and energized by whatever else will be at those degrees in your chart. Maybe she doesn’t need to put her guns down. Maybe she shouldn’t.

Pallas is sheltering you where it matters most these days, where you feel most vulnerable.

I am accepting a couple more peeps for my next class in MoonPluto Land. Email for details. Two week class starting mid-September. $100. Your Life As A Work Of Art, Exploring The Nature Of Creativity, Your 5th House, And North Node

-+*Someone, somewhere, is wrestling his coat to the ground. It is springtime in the city. The city wakes up. Block after block […]

-+*Part One is here! This is just a fragment that I posted on Facebook, but wanted to put it on the blog […]

-+*My mother’s birthday is the day before the eclipse. She was a Scorpio. Mother is never far from a Cancer’s mind, dead or alive. […]

One thought on “The Stars Today! Mercury Trine Pluto And More About Pallas”