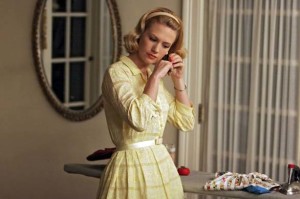 Sometimes it really is like clockwork even though my teacher used to say that the planets don’t run on “train time.”

Venus and Saturn go direct and clarity comes. Both Venus in Gemini and Saturn in Libra (in trine because they are air signs) spoke to our relationships. Venus = love. Saturn = maturity.

Were you confused during the retrogrades or, at the very least, suffering setbacks? And now you are free? Your mind is free? Your heart is free? I feel back on track. Perhaps the Moon in Aquarius making a Grand Trine in air yesterday sharpened the focus.

But ponder this issue. See if it’s true. Are you MORE clear now?

Mars now in Libra tells a similar story. The passion (Mars) to relate (Libra) and to relate appropriately (Libra), to get it right, to put it right.

I’ve been watching Mad Men lately, Season One. I know I’m late to this famous show but I was busy with some other shows 🙂 I also don’t have a television, only Netflix.  Anyway, I am fascinated by the character of Betty Draper who looks like a doll and this surface, of course, is a mask. Complexity beneath, rage beneath. This isn’t a new characterization of Woman but I like the way her story is unfolding.

This character would have Libra or Libra Rising no doubt. A stellium in Libra. Probably with a Scorpio Venus. She’s crammed with desire but has been taught to be polite and gentle even when rejected or offended. Always pleasant. And yet…

Are you clear like glass? Are you beyond doubt? How’s your mask doing?

And, you know, that rage, her rage, your rage is also a mask It just hides something else…

One more point about Mars (rage) in Libra (relating): Libra is known for indecision 😉 Could this transit throw even more options into your heart? Or will the drive to marry (Libra) and I mean marry a person or an idea or a course of action… will this Marsy fire be braver than any and all confusion?

Food for thought, for the Sun in Cancer.

-+*One more square to my Mars in Cancer and I know I won’t really understand this transit until it’s done. The limits […]

-+*Jupiter is a gift to you from the UNIVERSE. Seethe less. Enjoy more 🙂 Love, MP 🙂

-+*Well, actually we do have secrets 🙂 I mean, Scorpios do. Scorpio Season does. Like clockwork, I get off the train, the […]